National Geographic: Florida’s rare ghost orchids are getting cut off from water

The battle to save South Florida’s water from mismanagement and water hogs (Big Sugar is a good example of both) is epic. For spectacular ghost orchids, wildlife and humans, water is life.

We fight day in and day out at the 30,000-foot level, explaining what’s at stake – and at the 6-foot level against a handful of powerful interests who have no qualms about taking all of it. But make no mistake, this is a fight all Floridians must enter. Now Or Neverglades.

National Geographic: Florida’s rare ghost orchids are getting cut off from water

“Spurred by a deadly confluence of red tide and toxic blue-green algae blooms, local businesses educated themselves on water quality. They found a unified voice to push for stricter pollution limits. As the kids say, they got woke. And it had a tangible impact on Florida politics.”

Turns out, the tree-huggers and small business alliances have more in common than they think.

If there is only one thing you read this week, it should be this OpEd by Andy Mele of the Suncoast Waterkeeper. Not only does he call out Mote Marine Laboratory, which is neither accredited nor academic, but he lays out how the deception and misdirection continues. Very well done.

For anyone who could use a quick reminder of what Everglades restoration is all about, here's a great video. Listen to Dr. Paul N Gray of Audubon Florida explain it in 90 seconds.

There are a number of problems facing the Everglades, from pythons to nutrient pollution. None compare to the biggest obstacle - a lack of clean freshwater. Physically and politically standing in the way of the solution for decades are two corporate owners 800-square miles of sugarcane: Florida Crystals and US Sugar. We call them Big Sugar. 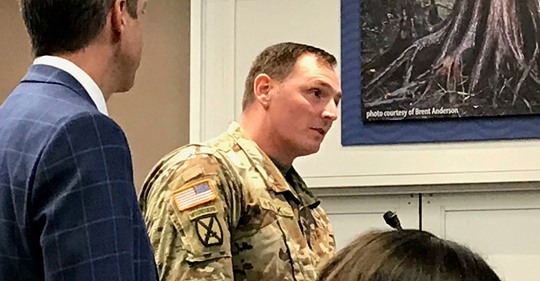 So many pieces to the puzzle. What was supposed to be a 90-day process to get the permits issued from the Army Corps has languished for more than a year. The state is finally doing its part. It’s time for our partner – the federal government – to do theirs.

Call or email the Army Corps’ executive office. Message to Lt. General Todd Semonite: Get those permits approved for the EAA Reservoir. www.usace.army.mil/Contact/

This move by the Governor and the Cabinet unwinds sugar’s lease of the public’s land – given away by the previous administration in 2013 – so the Everglades reservoir and treatment project can move forward.

It has taken way too long to get here, and the clock is ticking fast, but Governor Ron DeSantis' push and persistence, through DEP and the South Florida Water Management District’s governing board, could not have come at a more important time.

In other good news, permits have been issued moving us a giant step closer to raising more of the roadway on Tamiami Trail so that freshwater can flow under and into the Everglades.

This is a crucial project for Everglades restoration, we’re thrilled to see it moving quickly!

A new bipartisan effort is underway to reform the bloated federal sugar subsidy program, a program that hasn’t changed in 80 years!

Last year, Big Sugar managed to kill an amendment to the Federal Farm Bill which would have reformed their corporate welfare scheme.

It was hard to watch, but only three Florida politicians were willing to stand up to sugar and vote their conscience: then-Congressman Ron DeSantis, Congressman Brian Mast, and Congressman Francis Rooney all voted in favor of the amendment, but that wasn’t enough to overcome sugar’s influence in Congress.

Now, we’ve got another chance to reform the program. Big Sugar will hate it. But this is where real change begins.

Call your representatives and tell them you support Fair Sugar Policy.

The Governor and DEP are taking aim at the state’s biggest sources of pollution: farms, aging wastewater treatment plants, stormwater and treated human waste used as fertilizer. Once the legislation is finalized, it will be in the hands of the Legislature. Stay tuned!

The fuse has been lit and it will take time to pull us out of the spiral. Governor DeSantis and his agencies are firing on all cylinders, but without swift and certain action from the Florida Legislature, things only grow worse from here. No more excuses, lawmakers. No finger pointing. Do your job.